'My choices early in life were either to be a piano player in a whorehouse
or a politician. And to tell the truth, there's hardly any difference.' 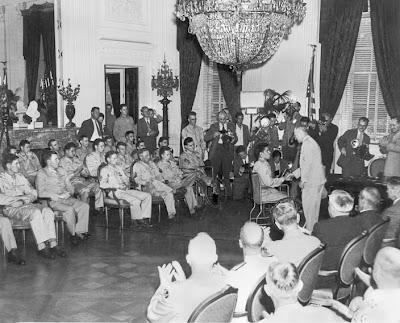 When offered corporate positions at large salaries, he declined, stating,
'You don't want me. You want the office of the President, and that doesn't
belong to me. It belongs to the American people and it's not for sale.'

Truman greeting returning military for honor ceremonety at the White House after end of WWII, photograph from the National Archives

Posted by Unknown at 10:06 AM No comments: Links to this post