Ronald and Nancy Reagan arriving at the CPH, 1966 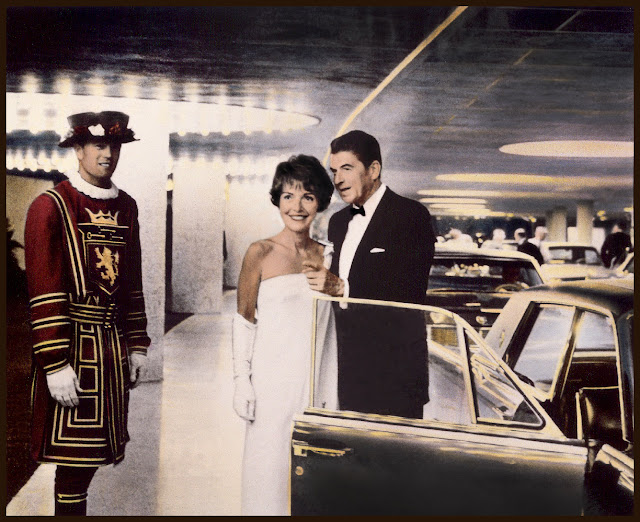 Rolling back the clock nearly two decades from my last post, here is a shot of Ronald and Nancy Regan getting out their limousine as guests of honor at the opening of the Century Plaza in 1966. Harry Mulligan, the Hotel's firsts General Manager was on hand to introduce the world to a broad list of innovations at the CPH, including its state of the art security procedures quickly made the Century Plaza a destination resort for innumerable galas and high profile functions.  Additionally, it was the first hotel with clock radios in ever room. Century City was rapidly establishing itself, built on what only a few years early was the back lots of Fox Studios.
___________________________________

This rare photograph shows Ronald and Nancy Reagan as they arrive at the Century Plaza Hotel to attend the Century Ball, a gala event celebrating the opening of the Hotel • June 1966

Hand-tinted © Bennett Hall • From the Collection of The Century Plaza Hotel
Posted by Unknown at 3:05 PM No comments: Links to this post 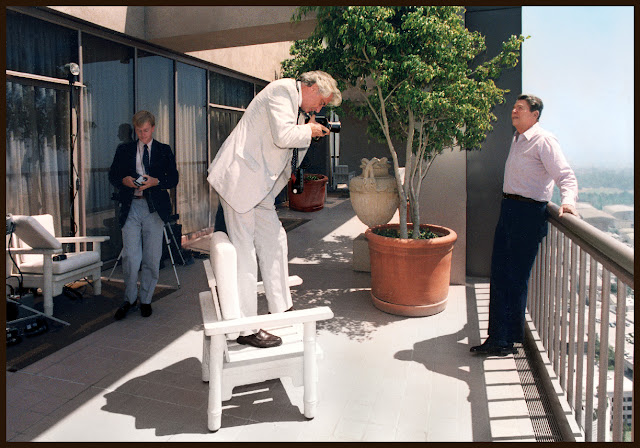 President Reagan was not only the first guest to enter the newly completed Century Plaza Tower in 1984, but he stayed in this magnificent 360-degree view suite encompassing the entire 32nd floor of the Tower with such frequency that it was dubbed the "Western White House" by the media.   In 1999, the Suite was remodeled and christened the "Ronald Reagan Suite", an opening attended by Nancy Reagan and  extensive media coverage.  We had the honor of developing the strategy for this project for the hotel, St. Regis at the time,  and producing the exhibits chronicling the President life and relate publications.
Ronald Reagan Suite - Business Image Group
President Reagan poses for Life photographer Harry Benson on the balcony of the future  Ronald Reagan Suite • August 28, 1987
digitally mastered from collection of the Ronald Reagan Library
Photograph by Pete Souza
Posted by Unknown at 2:57 PM No comments: Links to this post